On June 9, in the Geophysical Center of the Russian Academy of Sciences (GC RAS), during a meeting of the scientific council, Chief Scientist of GC RAS Academician Alexey Dzhermenovich Gvishiani was awarded an award «Honorary Worker of Science and High Technologies of the Russian Federation».

The award was assigned by the order of the Deputy Minister of Science and Higher Education of the Russian Federation on April 19, 2021 for significant merits in the field of science and many years of conscientious work.

Congratulations to Alexey Dzhermenovich with the presentation of the honorary award! 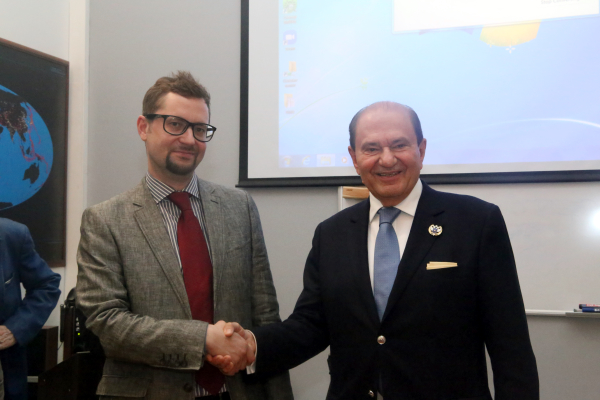 Director of GC RAS Corr. Member of RAS Anatoly Alexandrovich Soloviev and Chief Scientist of GC RAS Academician Alexey Dzhermenovich Gvishiani
News
November 10, 2021 From 23 to 28 October in the village Udabno (Georgia), a joint expedition of employees of the Geophysical Center of the Russian Academy of Sciences and the Institute of Geophysics and Engineering Seismology named after A. Nazarov of the National Academy of Sciences of the Republic of Armenia.