November 2, 2018. The Earth Sciences Department of the Russian Academy of Sciences held an international seminar "System Analysis of Earth Science Data" in the beige hall of the RAS Presidium in honor of the 70th anniversary of Academician A.D. Gvishiani.

The speakers of the seminar were world-renowned scientists. The first presentation was “Observations, modeling and data on imminent and "extreme" revolution " by Professor Pavel Kabat, Scientific Director of the World Meteorological Organization (WMO), former Director General and Chief Scientist of the International Institute for Applied Systems Analysis (IIASA, Laxenburg, Austria).

Professor Mioara Mandea, Head of the Department for the Study of Earth from Space of the French Space Agency (CNES), former Secretary General of the International Association of Geomagnetism and Aeronomy (IAGA) and the European Union Geoscience (EGU), member of the European Academy (Academia Europaea) and the Academy of Sciences of Romania (Academia Română), spoke about "Observing the magnetic world: when it follows the measurements".

Academician of RAS E.M. Galimov, scientific director of the V.I. Vernadsky Institute of Geochemistry and Analytical Chemistry of RAS (GEOKHI RAS), laureate of the State Prize of the Russian Federation made a report on the prospects for studying the Moon.

At the end, the hero of the day – A. D. Gvishiani presented his “Remarks on theoretical and applied systems analysis”. 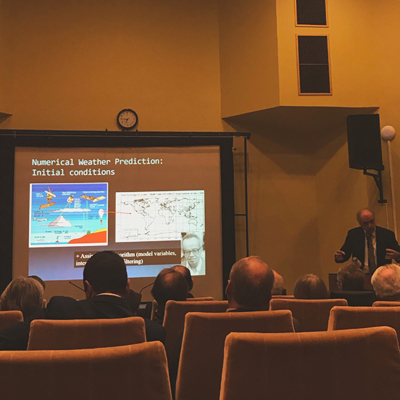