June 8, 2018. D.Sc. Mikhail Kaban (GFZ, Potsdam, Germany) presented the report: "Structure and evolution of the lithosphere of North America on the basis of complex modeling of gravitational and seismic data" in the Belousov hall of GC RAS. The research team also included Alexey Petrunin, Walter D. Mooney and Magdala Tesauro.

Their research was devoted to the study of the Earth's crust and upper mantle of the North American continent. The results of the conducted studies made it possible to formulate a hypothesis about the displacement of the lower part of the North American craton in the western and south-western direction relative to its central part. Modeling of mantle convection has shown that the shift of the ancient platform was caused by the influence of mantle currents for 200 million years since the last reorganization of plate tectonics and the opening of the Atlantic. The results of the calculations fully correspond to the geological data. The authors of the study suggest a hypothesis about the existence of an interaction of mantle currents (thermal, mechanical, compositional) with the lithosphere. 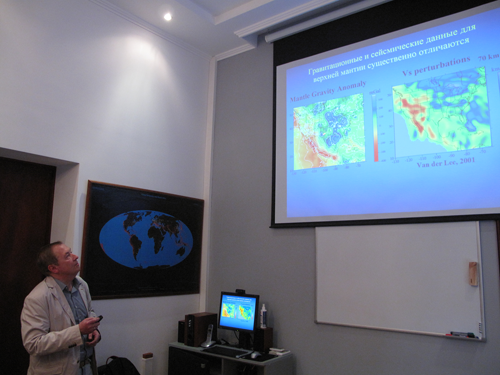